Why diversity and inclusion is good for business

There is no doubt that diversity and inclusion is on the agenda for all executive teams and leaders. Certainly, over the last 10 years I have seen much more discussion on this across all areas of industry.

But what does diversity and inclusion mean? So often it seems to just be associated with gender equality, but it’s so much broader than that. I was reminded about this on a recent panel, which has got me thinking: what constitutes an inclusive working environment?

Let’s face it, we have all at times felt unrecognised with no voice. I know I have. So, in my mind, being inclusive is about creating an environment that thrives on our differences: where we recognise that people are different and that there is nothing wrong with that; where everyone has a valuable contribution to make; where no one is discriminated against based on their race, religion, sex or sexual preference.

Everyone deserves the opportunity to develop skills and talents to reach their full potential, and work in a safe, supportive and inclusive environment, where they are rewarded fairly, recognise and have a voice on matters that impact them; where the benefit of having a range of perspectives in the decision-making process is acknowledged.

It is also important to appreciate that a one-size-fits-all approach is not the reality. People have different needs, so a flexible approach designed to support individual and business needs is required. This is clearly the case with dyslexia, autism and ADHD. It’s estimated that at least 10% of the UK population is neurodivergent, with mental health impacting one in five people in the UK. However, most workplaces are not really set up to support all these aspects, so employers are possibly missing out on people who bring a different perspective to an organisation.
While there is legalisation covering aspects of age, disability, race, religion, gender and sexual orientation among others, these are the minimum standards, so an effective diversity and inclusion strategy must go beyond just legal compliance.

In the late 1990s and early 2000s, Morgan Stanley paid out $54 million, and Smith Barney and Merrill Lynch paid out more than $100 million each to settle sex discrimination claims. In 2007, Morgan Stanley faced a new class action which cost the company $46 million. In 2013, Bank of America Merrill Lynch settled a race discrimination suit for $160 million.
I am sure much lip service has been paid to diversity and inclusion programmes over recent years, but there is good evidence that shows that companies perform better when they have a diverse workforce. It must be a company-wide mission where each employee knows they are valued and in return is held accountable for their contribution.

But why should boards and executives ensure that companies have diversity and inclusion programmes in place and are fostering an inclusive culture? Well, analysis shows that companies in the top quartile for gender or racial and ethnic diversity are more likely to have financial returns above their national industry medians. 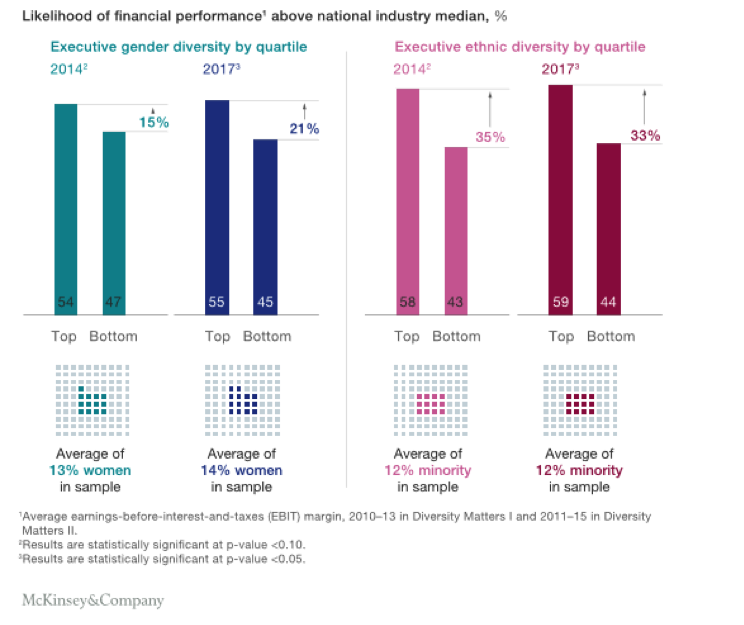 McKinsey produced an interesting report back in 2015 which revealed:

In 2017 McKinsey updated the figures. The companies in the top quartile for gender diversity which were 15% more likely to have greater financial returns, are now 21% more likely to perform above the national industry median.

So, there is plenty of evidence to suggest that there is a strong business case for diversity. Though sadly it is still clear that the progress of diversity in senior and exec management is slow globally.

We all want to work in environments where employees can share their ideas, take considered risks, speak up without fear and be their true self. After all, no one no one has the monopoly on great ideas. It’s also broadly acknowledged that a diverse workforce helps companies develop products and services that meet needs of the wider society, not just the few.

So, what can companies, exec and leaders do to ensure success? Well, I’m a firm believer in the fact that the most effective diversity programmes are about engagement at all levels, and it is this, rather than control tactics, which spark success. 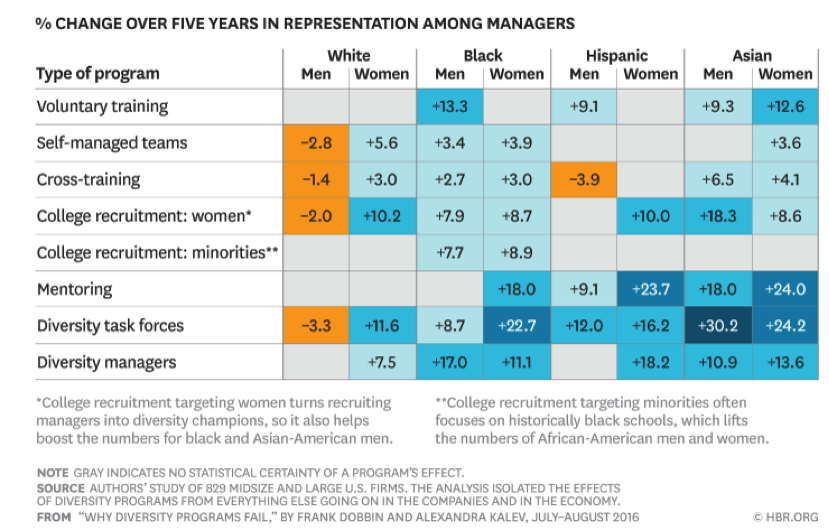 All the reports show that diversity is a good thing for business. And finally, as of this year, it’s been propelled to the top of the agenda across many industries. But while the benefits are being recognised, I believe diversity still has to be forced because natural selection bias may lead us to replicate the learnt behaviours of the past. And however provocative the commitments from the boardrooms (which are still too often full of white males) may be, too many performance measurements continue to be based on the same metrics that would be appropriate for anyone, like sales achieved, the delivery of functional points, number of applications processed, and so on. If companies truly want to address the imbalance, they need to adapt a longer-term strategy, adopt an inclusive approach from the inside out and live it every day – not just pay lip service.