With over 40.3 million “slaves” in the world, acting against modern slavery and human trafficking has never been more urgent. Studies and best practices have demonstrated that critical partnerships between businesses, governments, civil society, the funding community and the broader public are key. But how much progress have we done so far? What challenges remain to overcome?

Private organisations and individuals are very often unaware of the initiatives carried out by the public sector. The recently published Report commissioned by UK Independent Anti-Slavery Commissioner, or the initiatives taken by law enforcement entities like the Modern Slavery and Child Exploitation Intel Cell of the MET Police are just a few examples.

To educate ourselves and the broader audience on such a critical topic, EWPN and RedCompass Labs have invited some very special guests from the NGOs world and the public sector to learn more about what they are doing to fight modern slavery and understand what the future has in store for us.

• What are NGOs and public governing bodies doing to tackle MSHT?

• How does the public sector see collaboration with the private sector? What should be improved to enable more public-private partnerships?

• How is the financial sector contributing and what could it do more?

To fully promote an active dialogue, we are structuring the event into two parts as follows: a 30-minute panel session, followed by smaller break-out sessions in which our audience will have a real opportunity to get into conversation with our panellists.

The webinar will be organised in two parts:

Sustainable Rescue is an NGO dedicated to fuse performance management with digital technology in the fights against human trafficking. (www.sustainablerescue.com)

Themis is a key contributor to the UK Independent Anti-Slavery Commissioner’s Report and Agenda for Action across the Financial services Sector to prevent and fight modern slavery. (www.themis.com).

To facilitate dialogue, we will split into breakout rooms hosted by each one of our guests. Make sure to indicate which breakout room you would like to attend using the Eventbrite form and, where possible, send your questions in advance to callforaction@ewpn.eu

This event is part of EWPN and RedCompass’ call to action campaign to invite the financial services industry to commit to the battle against human trafficking and modern slavery. As part of this campaign, we wrote a joint whitepaper and organised our first townhall last year – a successful event that brought together participants from many different backgrounds and with inspiring different perspectives. You can find the recording here and more information on the campaign here. 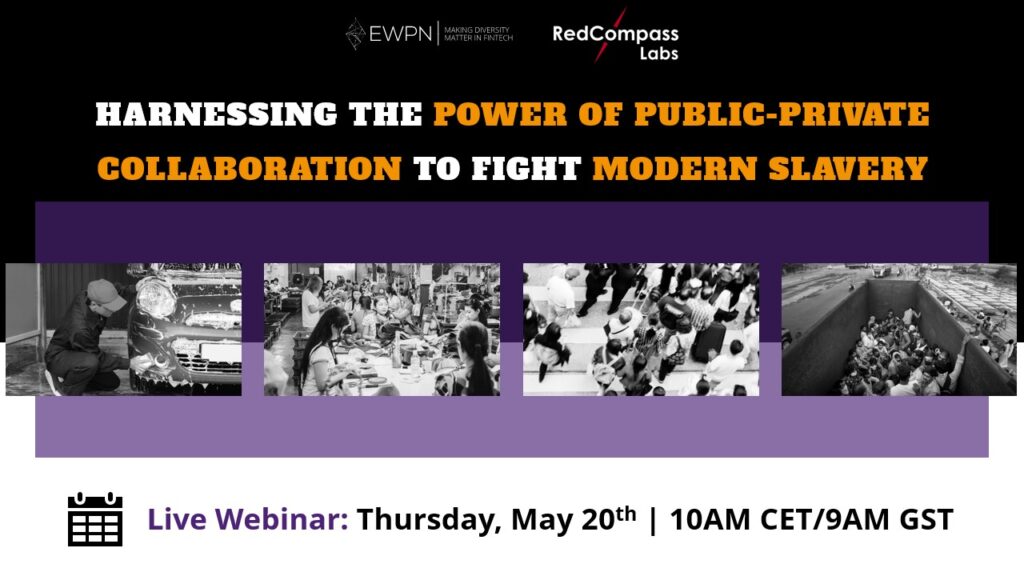